The Association was founded in 1937 and was originally known as the "Cheshire Branch" of the  Veteran Ladies’ Golf Association. Records of the activities of the Association from the outset until  the beginning of World War 2 in 1939 are sketchy, but the Competition Book from 1937 is still in  existence and gives us what little information we have today. One of the founder members was Miss  Henry (Wirral Ladies) who became the first Hon Secretary and her club hosted the first Field Day in 1937. The term “Field Day” was originated in the South of England by a Miss Field who gave her  name to the first Competition Day. It has since been retained in her memory.

The Association was disbanded during the War years as many golf courses gave way to farming for  the War effort. We do know that Mrs F. Buckley (Bromborough) was elected the first Captain of the  Association and that Mrs Doris Chambers had been appointed President. Mrs M. Stanley-Smith  (Wirral Ladies) was elected Captain for 1939 but was unable to serve her full year in office before the  onset of War in September 1939.

On 24th March 1947, after a lapse of eight years owing to World War 2, Mrs Stanley-Smith, who had  been appointed Captain for 1939, organized a General Meeting of the Association to be held at the  Grosvenor Hotel in Chester. The first item on the agenda was to elect a new captain and committee!  It was decided at this meeting that the next captain should come from the East side of the County  and Mrs Maud Bason (Prestbury) was duly elected.

In those days there was only one Field Day and courses across Cheshire were “offered” for the  event! The format was usually a medal round together with a putting competition and prizes were  donated by the Captain and Committee. Life after the War was, of course, still very difficult and it  was reported in the minutes of 1948 that, although “Wirral Ladies would be very pleased to extend  the courtesy of their course to the Cheshire Veterans for their Field Day, they feared that their  Putting Green would not be in readiness and they regretted that the Club Staff could do nothing  about the Catering.” The ever resourceful ladies of the Association vowed to “deal with the matter”  and later reports show that the Putting Competition was substituted with a “3 hole One Club”  Competition and the catering was put in the hands of Messrs Hubbard & Martin of Birkenhead who  provided lunch at 4s / 6d per head and tea at 1s / 3d!

It is fascinating to read from the ensuing Committee and General Meeting Minutes, of how steadily  the Association has grown over the years, aided by bundles of enthusiasm from the members. In  1948, the "Minutes" describe the number of members as "creeping up" and by the beginning of  1950 they were some 112 strong! By the beginning of 1948 a small bank balance had been  accumulated but two matches that year, both against Lancashire home and away, had plunged the  Association into debt due to the cost of transport and entertainment. Fortunately, the Cheshire  County came to the Veteran’s rescue with a donation of £10/ 0s/ 0d which enabled them to pay off  their debts and leave a small balance in the bank. “The news of this kind gesture by the County Association was received with acclamation.” As a result, it was proposed at the ensuing General  Meeting, that players asked to represent their County in any match should pay their own expenses  and that the Association should pay for lunch and tea for the visiting team. It was further proposed  that to save money the matches should be played alternately each year, either at home or away. The  Challenge was sent to Yorkshire for 1949!

By 1948, Miss Doris Chambers had moved to London but remained as President for many years. At  the General Meeting in 1948 she asked if the North would be prepared to play the South in the  coming year. With the agreement of all concerned from Cheshire, at least, she promised to pass on  the proposal to the headquarters of the Veteran Ladies’ Association on her return to London. The  match was duly arranged and held at Hoylake, on May 17th, 1949. The North won the match by 5 ½  to 4 ½.

With membership increasing steadily year on year and a healthy balance of £4- 9s- 3 ½ d in the bank,  it was decided in 1950, to introduce a Fixture Book which was to be given to each member. Certain  rules had now been laid down; there were now two Competition days per year and Northumberland  had been added to the list of County Fixtures. East now played West and subscriptions were  increased from 2/6d to 5/- but entry for the Field Day remained at 2/6d. All this information needed  to be printed in the Fixture Book.

In 1955, the Field Day was held on a fine, warm day at Ringway with 96 entrants: 40 in the Silver  Division and 56 in the Bronze. The Scratch Silver and Bronze titles were won by Ringway members,  Mrs Griffiths and Mrs Main but the handicap prizes were split almost equally between East and West  of the County. The prizes were presented by the Ringway Ladies’ Committee! In marked contrast,  the Heaton Trophy Foursomes held in the September of 1955 at Prenton was played in torrential  morning rain and heavy afternoon showers. It was however, reported that everyone enjoyed a very  successful day! The suggestion as to whether competition prizes should be bought out of  Association funds was raised at both Committee meetings in 1955 and it was decided that prizes  should be accepted from those members who wished to donate them and any shortfall should be  provided by the Association. The bank balance at the end of 1955 was £138-5s-11d. due in the main  to another increase in membership from 171 to 201 ladies.

At the AGM a proposal that members be elected to the Committee by ballot after nomination by  their home Club, was passed unanimously and thus was the beginning of the Committee format  much as it is today.

At the annual meeting of the Northern Vets Association at Leeds, Cheshire had put forward a  proposal “that no player who plays for the County should play in Veteran matches in the same year”. After much discussion, the proposal was put on hold until the following year as it was felt that if the  proposition was carried, Northumberland may not be able to field a team. It was later decided by  the Cheshire Committee that no useful purpose would be served by raising this proposition again as  it had not been met with favour by the other Counties and that Lancashire and Yorkshire would vote  against it.

The first Captain’s brooch was kindly donated to the Association in 1956 by Mrs Mary Heaton  (Delamere Forest) who was Captain of the day. Brooches for members were also introduced at a  cost of one guinea(£1-1s-0d). Mrs Heaton also offered to donate a flag to the Association which was  gratefully accepted on behalf of the members. Committee meetings continued at either the Talbot  or Grosvenor Hotels in Chester until 1957, when the room at the Talbot Hotel was not available.  Vicars Cross Golf Club kindly offered a room for the meeting on October 10th and became the  regular home of the Association for its Annual General Meetings.

By the mid ‘60’s, membership had grown to 514 ladies coming from thirty-two clubs in Cheshire. The  bank balance was a healthy, £230-2-11d. Courtesy was still being offered for Competition days and  the Lady Captains, committees and members “left no stone unturned and nothing to chance to  welcome and accommodate the Cheshire Veterans”. In the ensuing years, support for the  Association continued to grow. The bank balance has remained healthy due to careful accounting by

our various Treasurers and the enthusiasm and hard work by all Committee members has never  faltered.

In November 2003, it was proposed by the then Captain Mrs Barbara Leigh, that the Association  change its name from “Veterans” to “Seniors” to reflect a more flattering title for a modern-day  Association. At the time, the cost of such an act was the cause for some debate at the AGM but

members were assured that changeover would only be done by a process of natural wastage.  Therefore, only when the “old” wore out, would we replace items bearing the “new” name. A new  logo was commissioned and kindly designed by Mrs Sue Barrett (Sale) and was reflected on the  ensuing handbook. When the presentation cloths became beyond repair, two new ones were very  kindly donated by the retiring Captain, Mrs Barbara Leigh and the President, Mrs Moreen Thompson.  We now have three new flags to proudly fly at courses and newly engraved silver dishes for  presentation at the Championship and Field Days, all of which have been replaced systematically  over the years thus minimizing the cost to the Association.

In 2017 a decision was made to purchase a new Captain's Badge, in Silver Gilt, with the new logo on.  This was funded by a donation left to the Association by the late Dr Hilary Lyall. New style team  badges (colours) were also purchased.

Seven years into the Millennium, the Association truly came of age, when on February 10th, 2007 we  entered the world of technology and went live on the World Wide Web. Our carbon footprint was  further reduced that year, with the extensive use of email, progressing us forward towards a more  “paperless” Association. Internet banking followed as the Association moved with the times.  Over the years, the Association has gone from strength to strength. Its wealth can be expressed, not  only in monetary terms, but in the friendship, fun and enjoyment experienced by all the members.  We hope that this way of life continues for many years to come.

In December of 1950, a meeting was held at the Metropole Hotel in Leeds with representatives from  Northumberland, Cheshire, Yorkshire, Lancashire present. It was decided to form the Northern  Veteran Ladies’ Association and Counties with a membership of 100 or over were to pay a  subscription of £1, and those with less than 100, 10 shillings. The Trophy was presented in 1950 by  Miss E. A. Richardson, who was the Yorkshire Vets Captain, and her mother. Miss Richardson was the  Captain of Baildon in 1921, 1922 and 1923 and was elected as the first Secretary of the Yorkshire  Veterans Association at its inception in 1932. She retired from office in 1935 owing to business  commitments. The trophy was won in the first year by Yorkshire when Northumberland, Lancashire  and Cheshire also competed. In 1960, Durham joined the N.V.L.G.A and in their first year, won the  Richardson Trophy. Cumberland and Westmorland (now Cumbria) were elected to the N.V.L.G.A. in  1981 but to date have never won the Trophy. The Jamboree dates back to 1933 when a “North  versus South” match was arranged for Veteran Association members. Pannal Golf Club offered their  course for the match in 1934, followed by Wentworth in 1935. The Midlands joined in the Jamboree  in 1961.

Winners of the Richardson Trophy 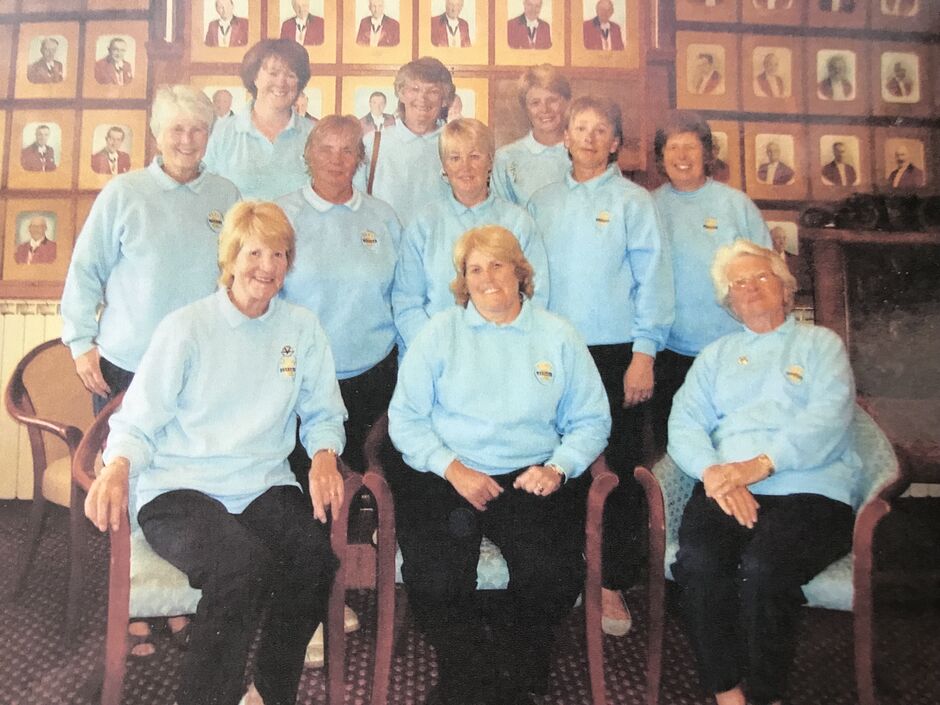